We all know the rainbow flag stands for the LGBTQIA+ community and it stands for pride, but did you know that each color has a meaning? Or that there’s a new blanket pride flag that was recently created and has taken over the original rainbow flag? It’s true!

The original pride flag was designed by Gilbert Baker, a friend of Harvey Milk, who was the first openly gay man to be elected to a political office of the United States in 1977. Harvey Milk’s dream was to create a symbol of hope and inclusion for the queer community to be displayed in marches. Gilbert Baker had just the idea—an eight-color rainbow, which was later simplified to six colors. 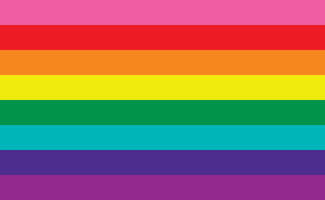 Read the below excerpt from Pride: The Story of Harvey Milk and the Rainbow Flag written by Rob Sanders and illustrated by Steven Salerno.

Harvey and the people asked for equality.

They asked to live and love as they pleased.

They hoped the march would make a difference.

Harvey was proud of the flag, and proud of himself.

He hoped others could be proud, too.

In 2018, the Pride flag was revised by designer Daniel Quasar to the Progress Pride Flag to include arrow-shaped lines on the left side of the original Rainbow Pride flag. The triangle included the transgender colors (light blue, white, light pink) and a brown and black stripe to represent people of color. 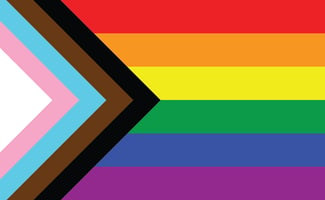 The most recent change to the flag came this year, by designer Valentino Vecchietti, to also represent intersex individuals. Check out this article from PinkNews, an LGBTQ+ advocacy website, about this 2021 remodeled progressive pride flag. 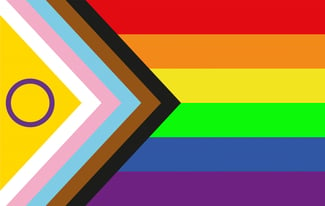 The Pride Rainbow Flag is a forever-evolving symbol of inclusivity and love for the queer community. Harvey Milk would be proud to see his first vision flying high with all he hoped it to be.

Download the below lesson that guides students through the creation of their own personal, unique flags!

Jennifer Epping is a high school English and journalism teacher in Des Moines, Iowa. She has a passion for reading, writing, and making lame jokes to her students just to see them laugh or roll their eyes. She just concluded her ninth year teaching. Epping graduated from Iowa State University with a BS in journalism and mass communication (2010) and BA in English Education (2013). She attended New York University’s Summer Publishing Institute (2010), and spent some time in children’s book publishing in New York.