This lesson module can be used by regular or AP® World, U.S., or European History teachers to develop an understanding of how sport has been used as a "tool" to assimilate Indigenous cultures into the Imperial state's economy, politics, and culture. Portions or all of the lesson modules could also be used in Sociology, Anthropology, Government, and Economics courses.

Early modern and modern nation states have used many methods to incorporate colonial peoples into their world and accept their culture as superior. Education, music, art, and fashion and dress have been Imperial states' strategies to make the Indigenous people look and think like them. Introducing Imperial states' sport is another. This module introduces three lessons to help students understand how sport has been used for colonial advantage and control.

First, a comparative lesson idea where students in small groups use the digital resources provided to explore how various Imperial states used sport as a strategy to gain power and control. Then meld/synthesize those specific colonial state examples into a "model" or formula as to how, in a continuity over time, Imperial states used sport to assimilate Indigenous people.

Second, students will use digital resources seen in this module to write a Long Essay Question (LEQ) (developed by me) on the topic of Imperialism and sport in the modern era. Students can begin to develop essay writing skills of thesis and contextualization along with providing evidence to support a historical argument.

And third, teachers can adapt a 2012 College Board APWH Documents Based Question (DBQ) to their own needs or to the current AP® history DBQ rubric to teach students how to source documents, develop an argument using documents, write a thesis and context analysis, and analyze evidence beyond the documents provided in their historical argument. 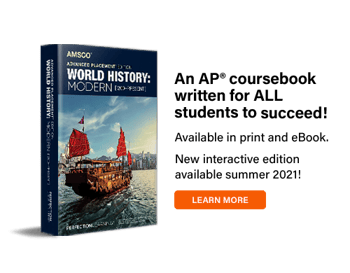 Advanced Placement® is a trademark registered and/or owned by the College Board, which was not involved in the production of, and does not endorse, this product.